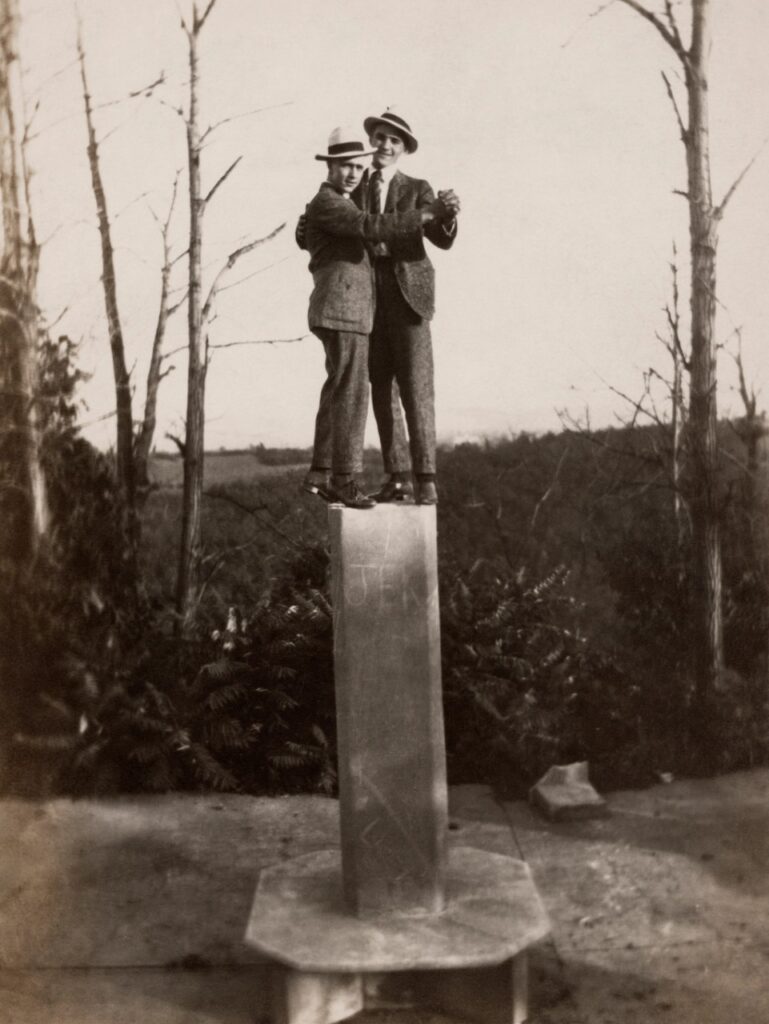 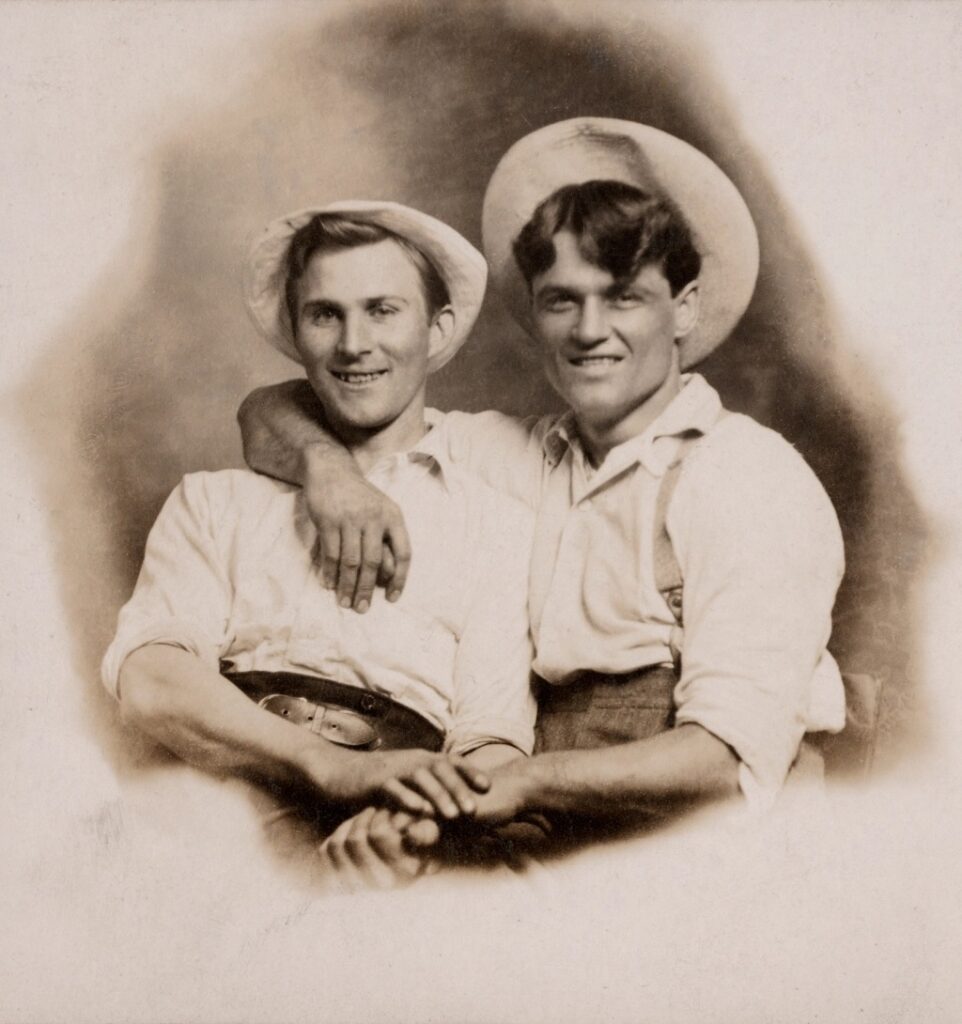 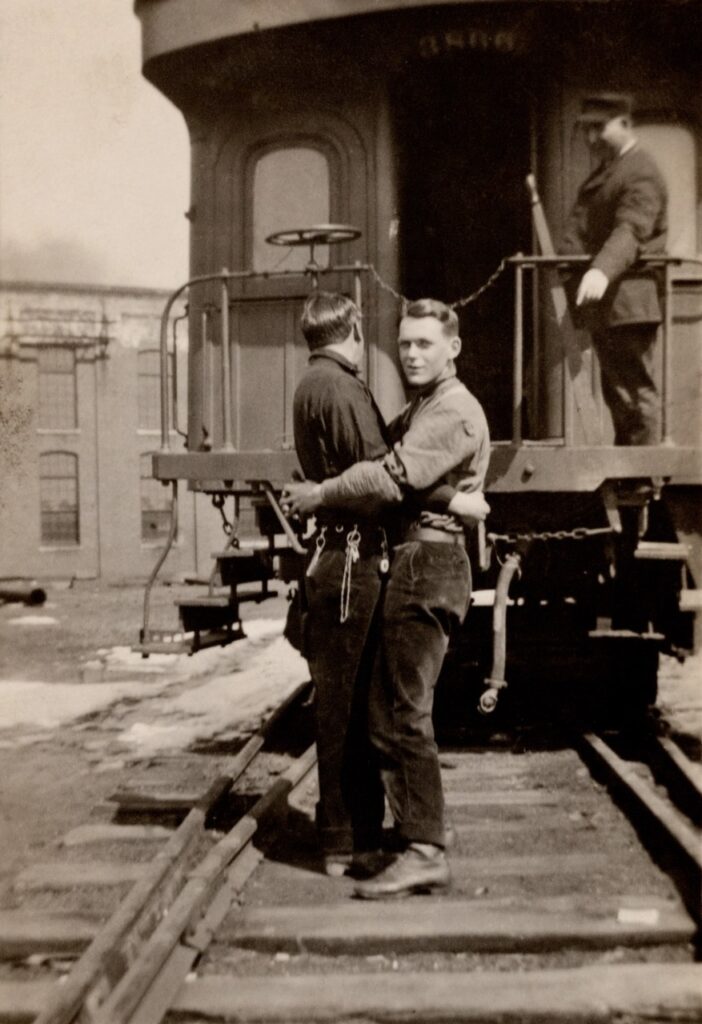 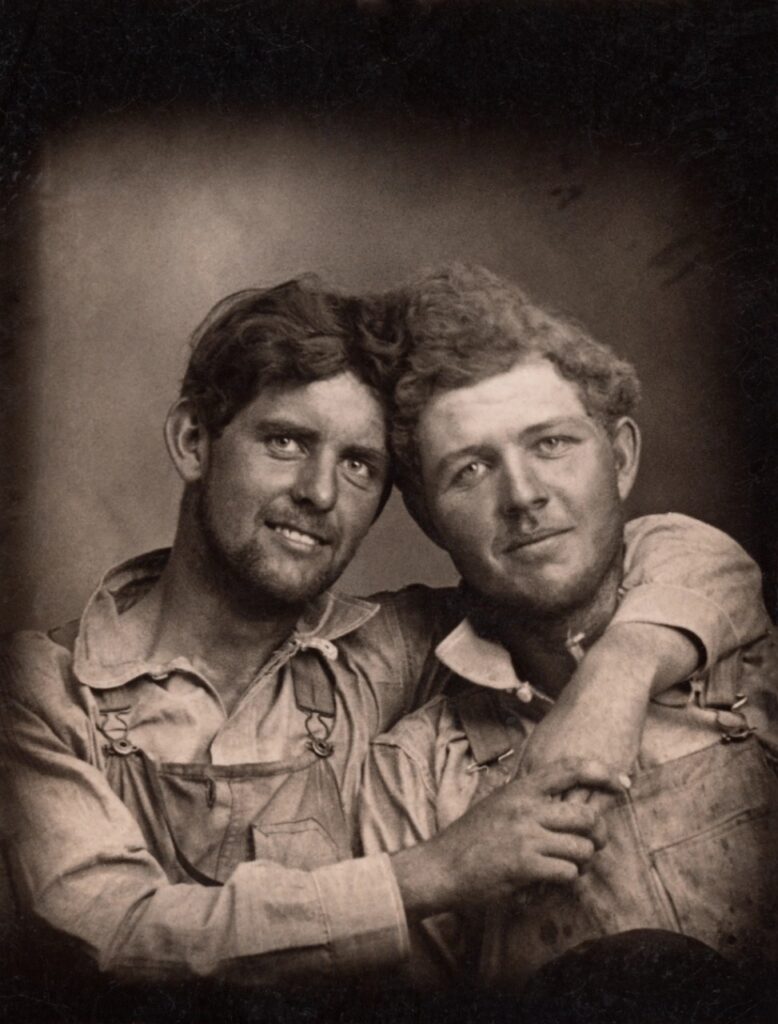 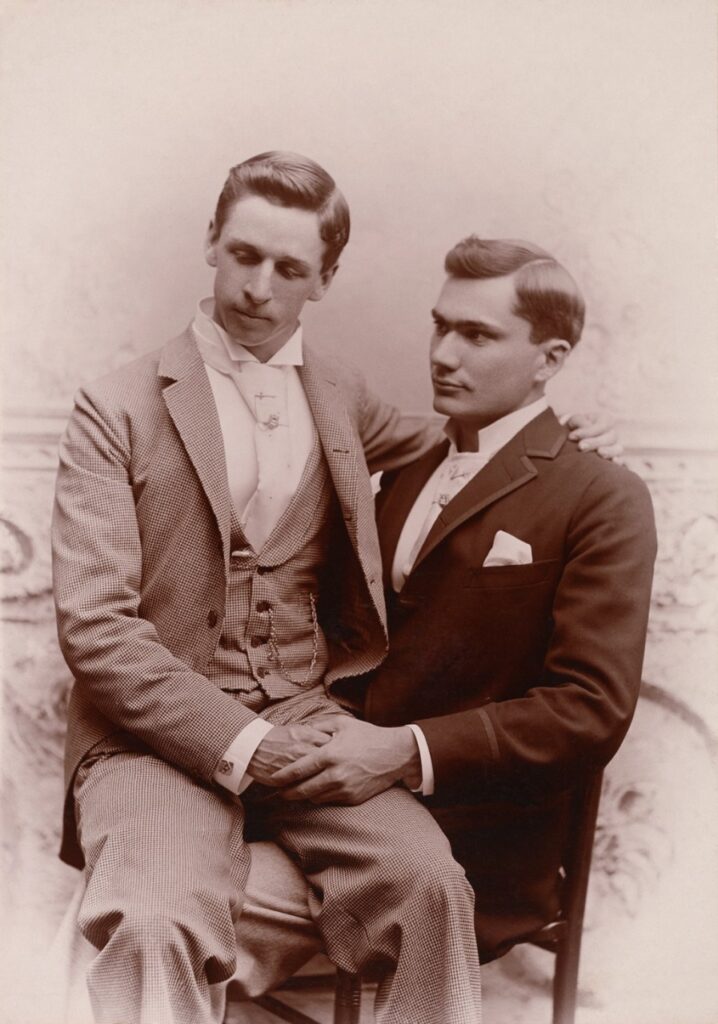 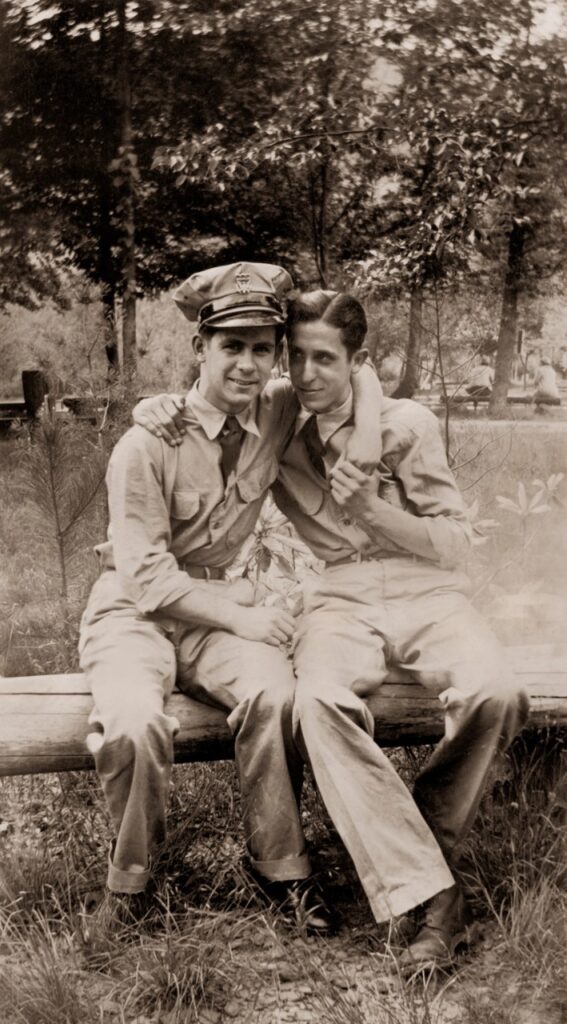 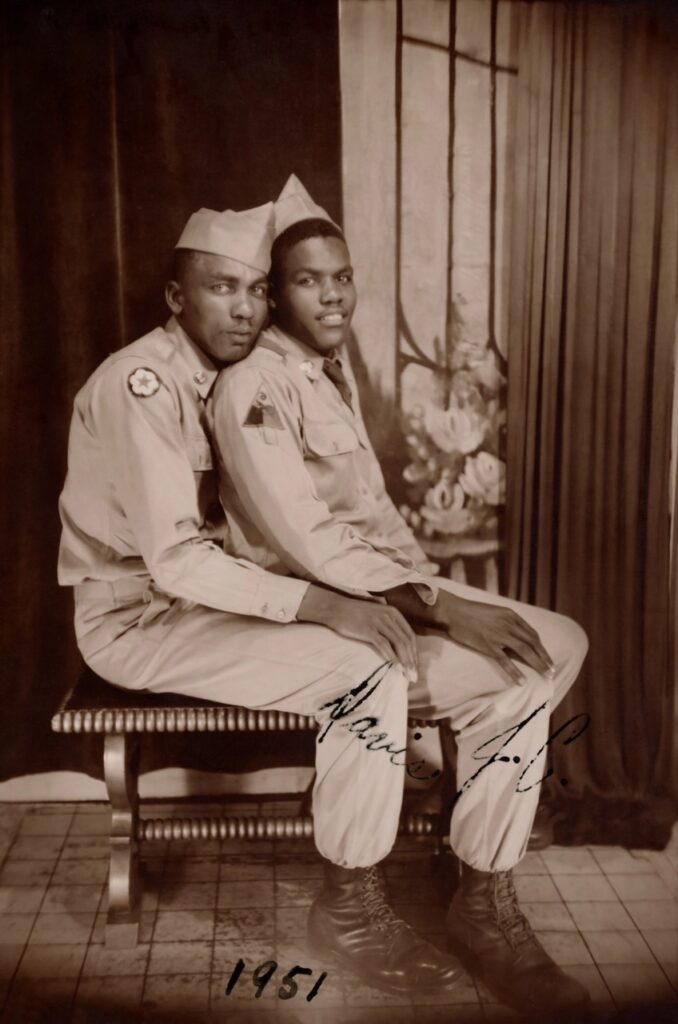 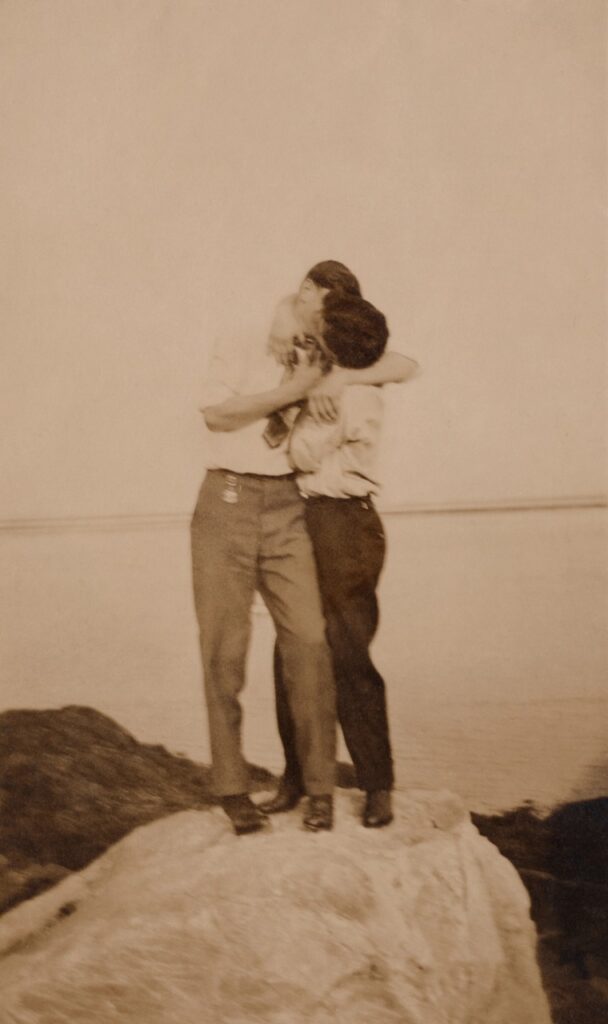 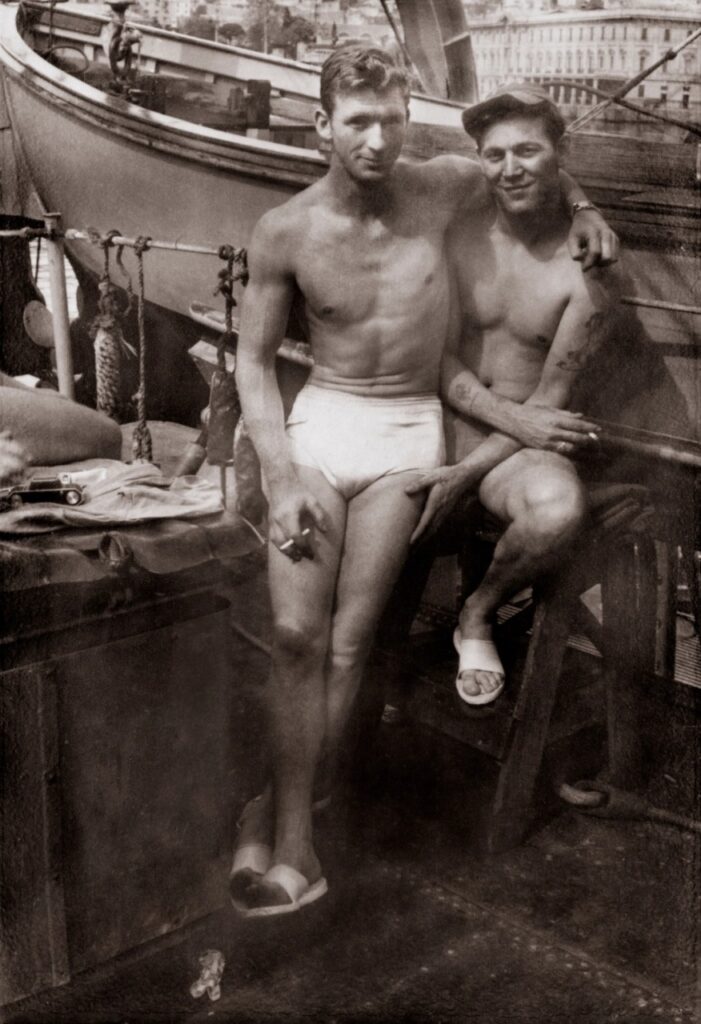 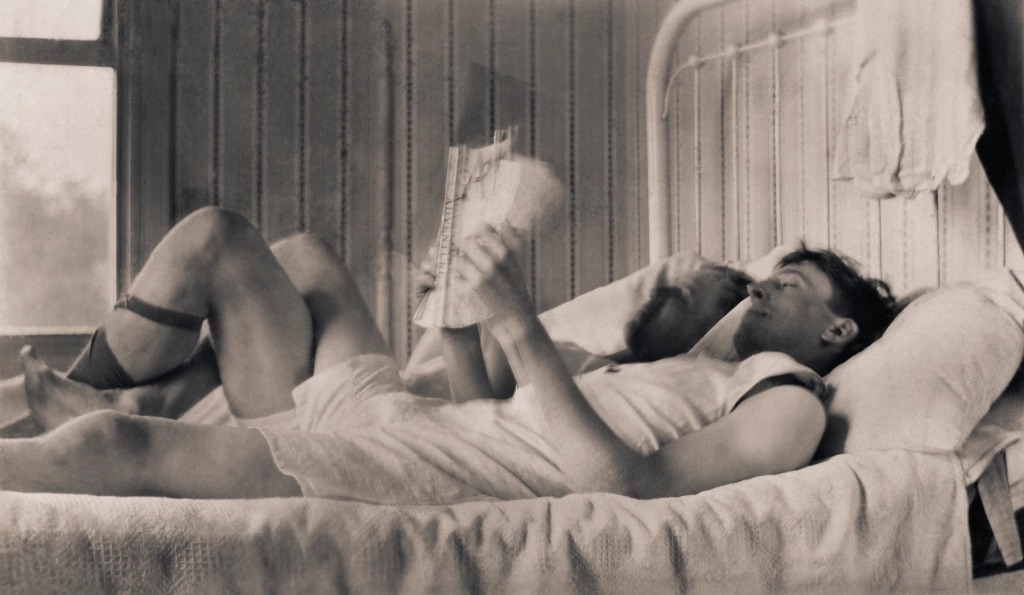 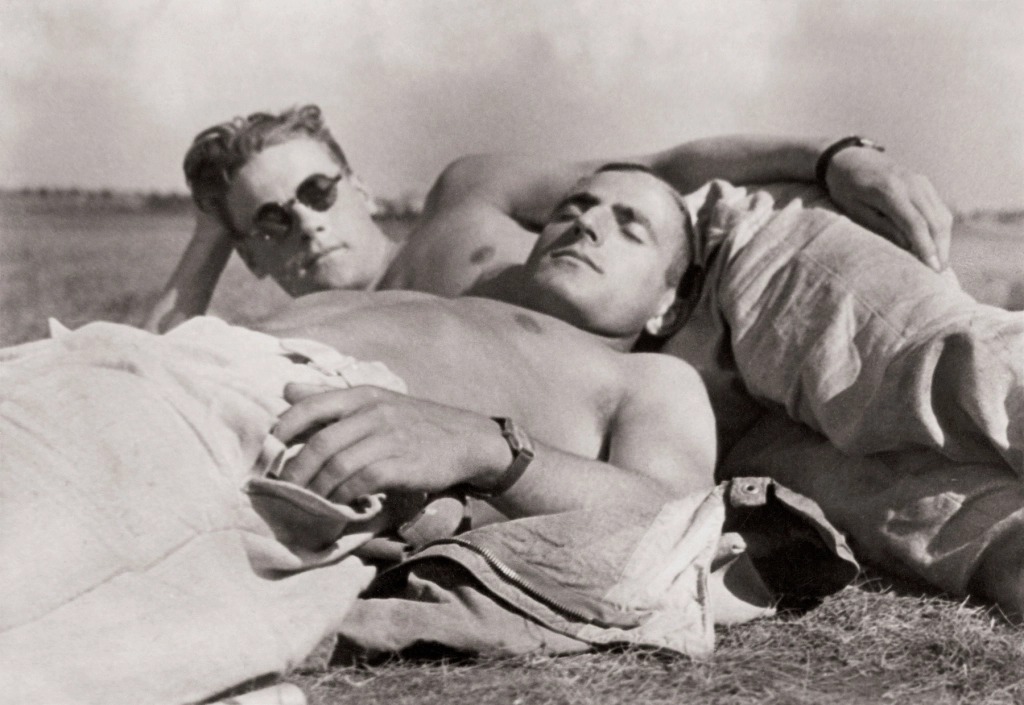 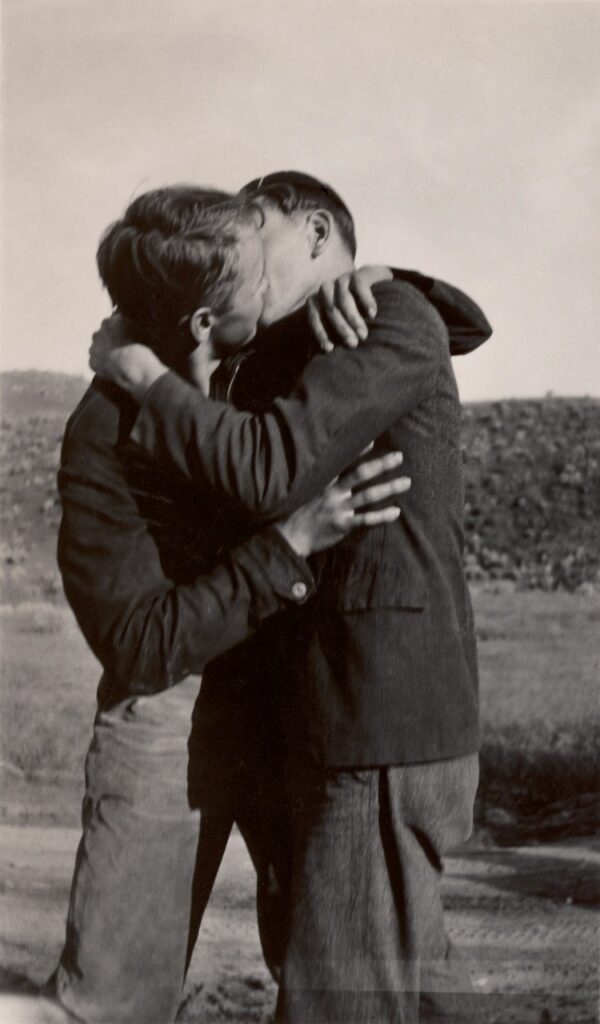 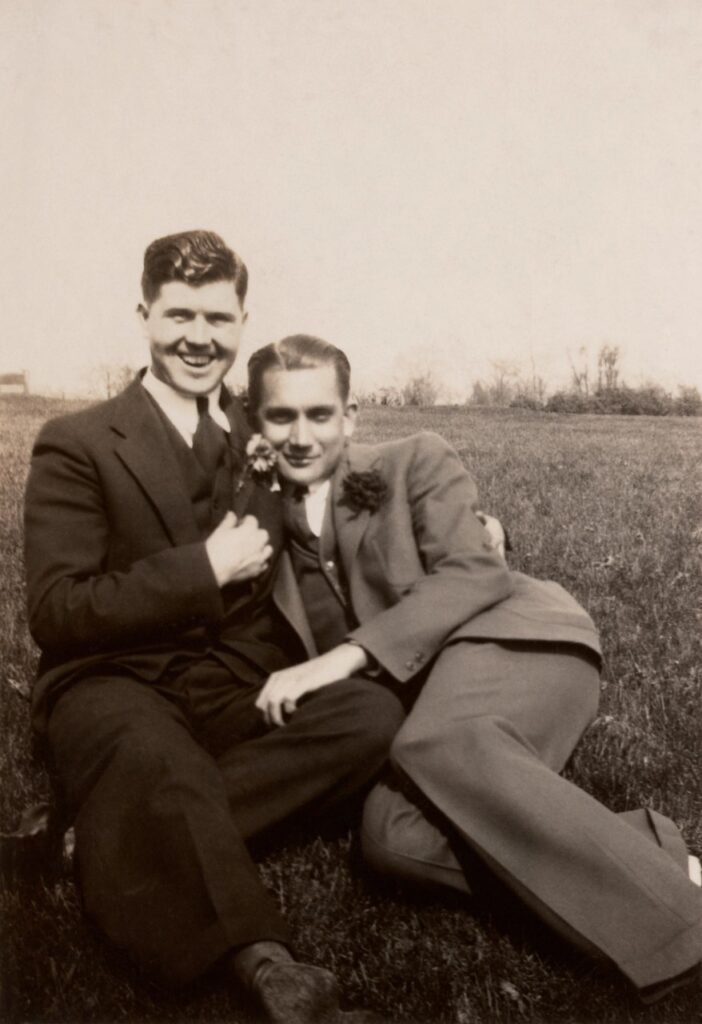 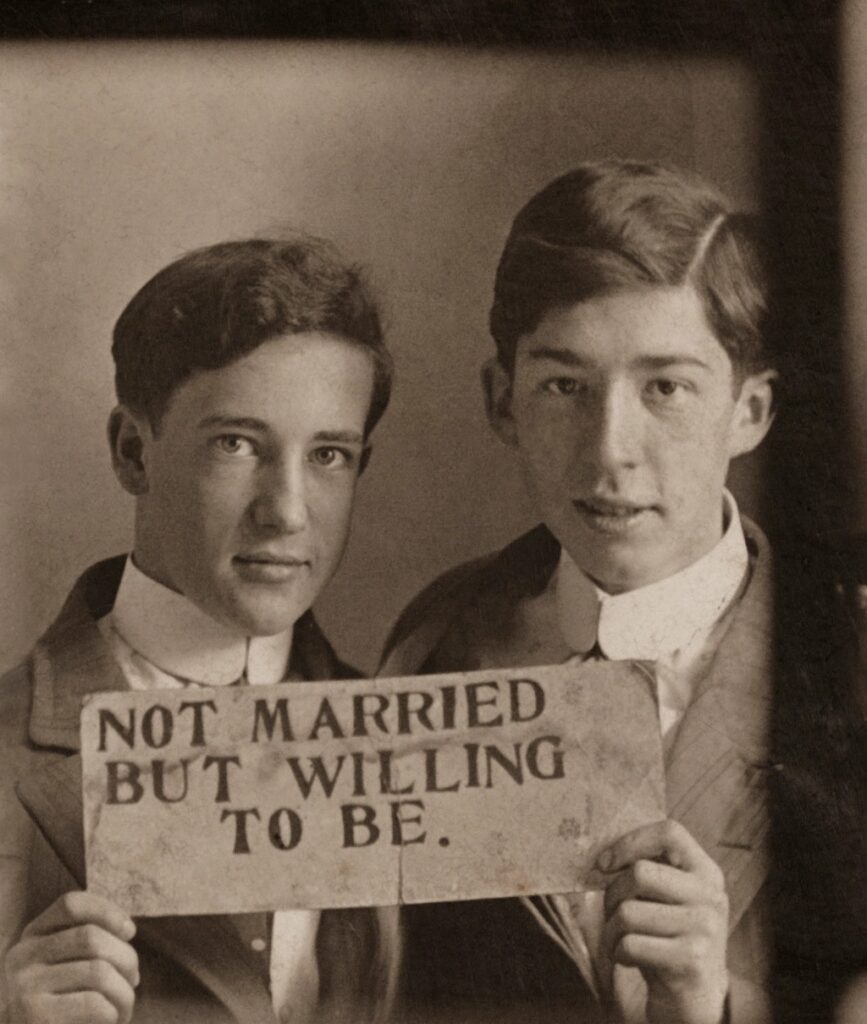 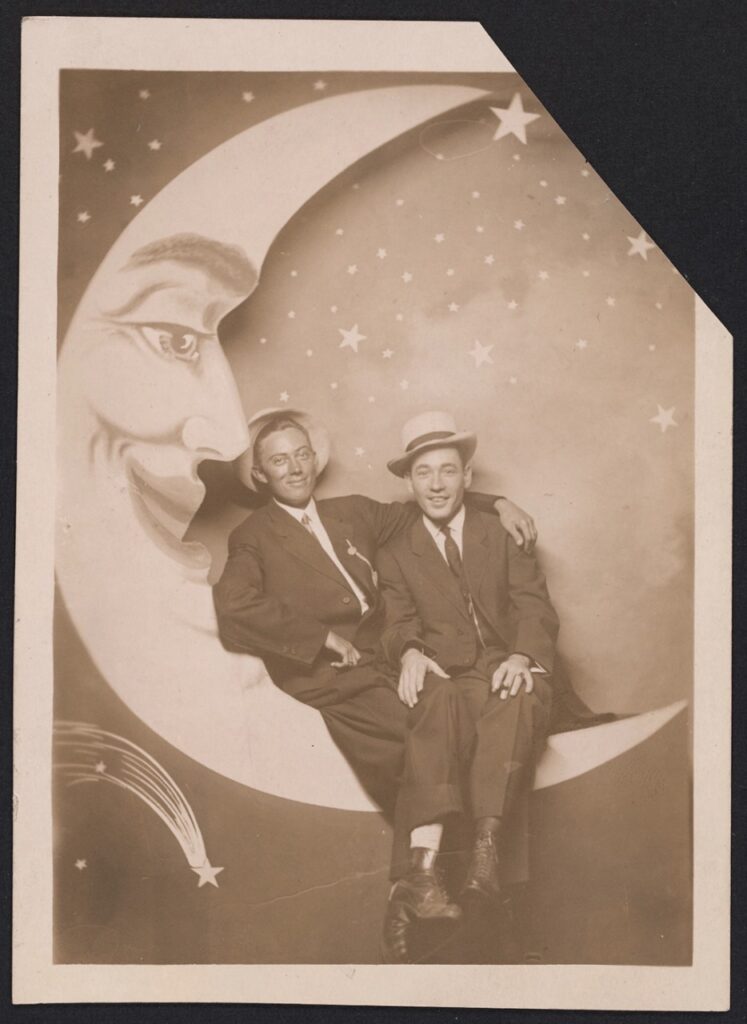 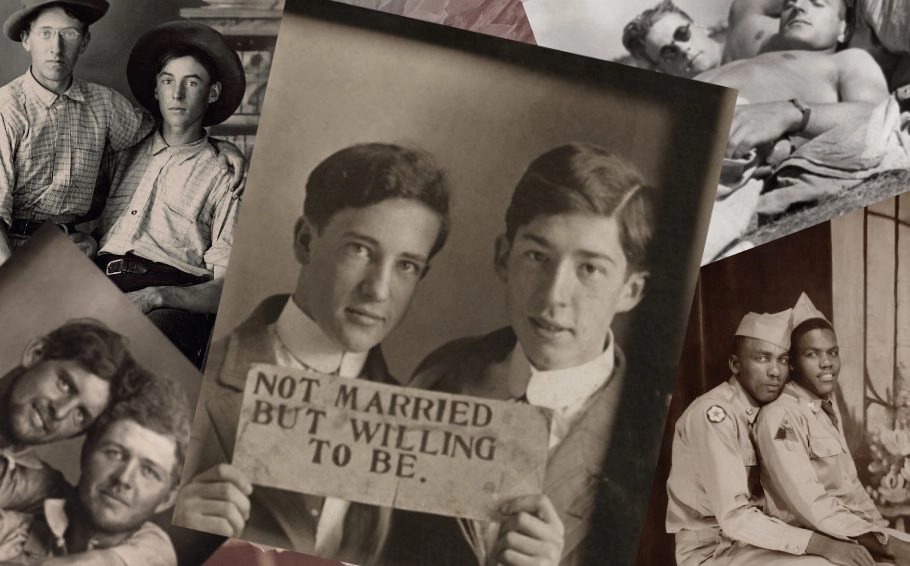 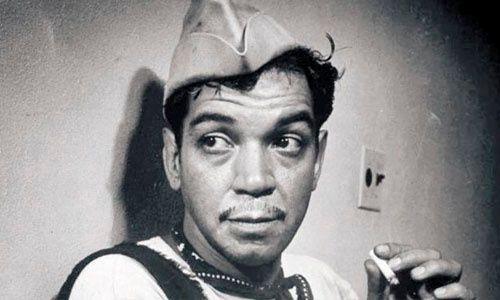 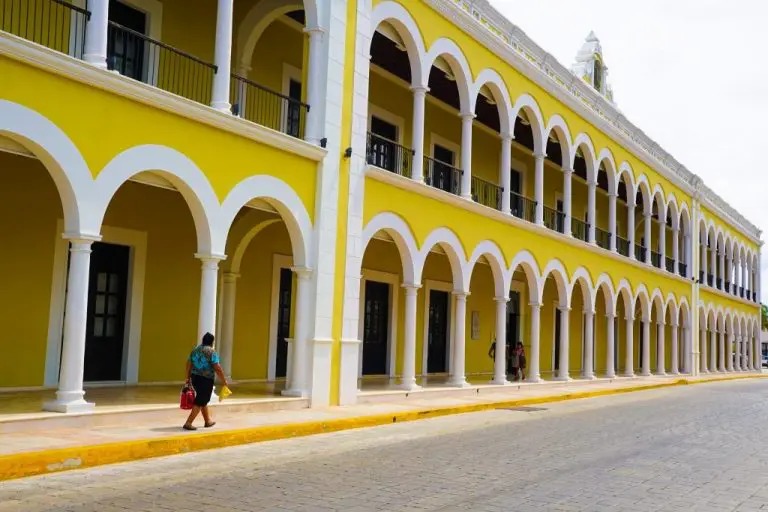 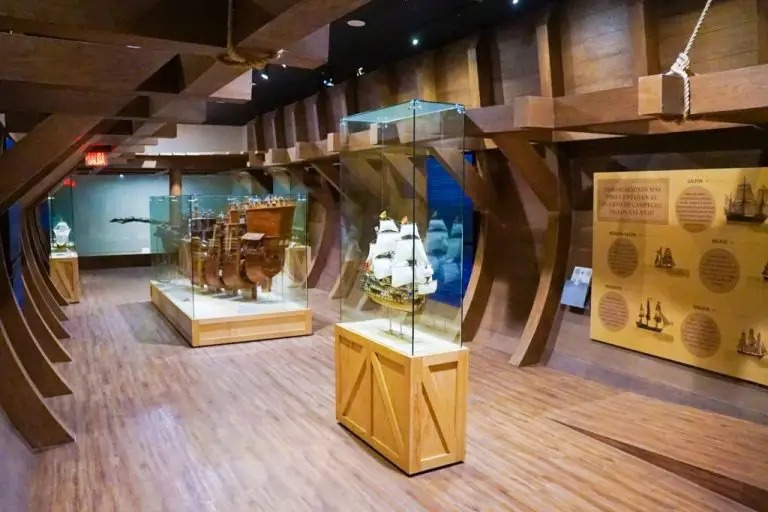 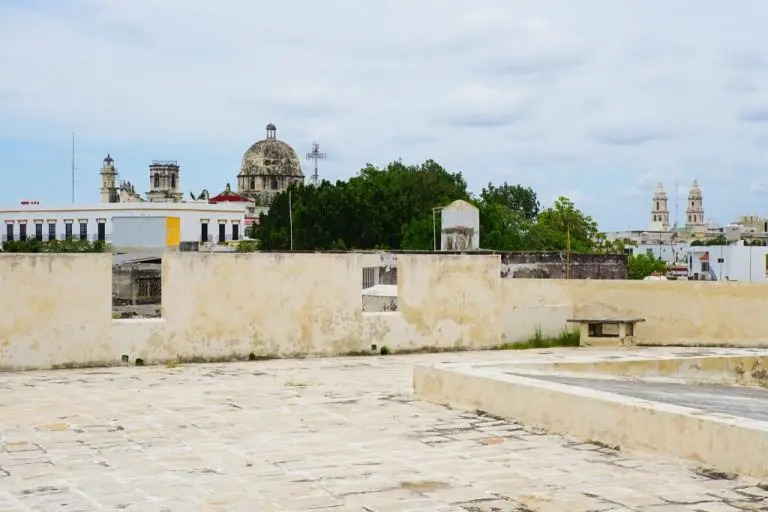 Hugh Nini and Neal Treadwell’s journey began in an antiques shop in Dallas when they discovered a photograph of two men, unmistakably in love.

Nini and Treadwell saw themselves in the two men in the photograph and were filled with so many questions about who they were. Neither of them expected that this photograph would become the first of a 2,800-image collection and that they would publish their own book, “LOVING — A Photographic History of Men in Love 1850s-1950s.”

Nini and Treadwell would come to refer to this book as their “accidental collection.” Each year, as they traveled Europe, Canada and the United States, they combed through boxes of photos at flea markets and in antiques shops to find more photos of men in love. In the beginning, the collection was composed only of found photographs that they felt spoke to them. Eventually, they began to pursue them actively online, in estate sales and in family archives.

Nini and Treadwell wrote this about finding their first photo:

“Our collection began twenty years ago when we came across an old photo that we thought was one of a kind. The subjects in this vintage photo were two young men, embracing and gazing at one another — clearly in love. We looked at that photo, and it seemed to look back at us. And in that singular moment, it reflected us back to ourselves. These two young men, in front of a house, were embracing and looking at one another in a way that only two people in love would do. Dating sometime around 1920, the young men were dressed unremarkably; the setting was suburban and out in the open. The open expression of the love that they shared also revealed a moment of determination. Taking such a photo, during a time when they would have been less understood than they would be today, was not without risk. We were intrigued that a photo like this could have survived into the twenty-first century. Who were they? And how did their snapshot end up at an antique shop in Dallas, Texas, bundled together with a stash of otherwise ordinary vintage photos?”

The two found their second photo through an online auction. It was tiny, the size of a thumbnail, and portrayed two young soldiers circa 1940. The gaze between the men was just like the one they saw in the first photograph they found. The words “Yours always” were etched in the small glass art deco frame around the photograph.

The earliest image in their collection dates to 1850, and the collection spans 100 years, including images from the Civil War and World War II. They come from all over the world and aren’t all traditional photographs — some are daguerreotypes, glass negatives, tintypes, cabinet cards, photo postcards and even photo strips.

Determining whether the men in the photographs were in love was not always easy, especially when acceptable displays of affection between men have changed so much through the years. Nini and Treadwell share in the book how they made the determination:

“When deciding whether or not to acquire a photo or snapshot, we have a rule that we follow. We call it the 50/50 rule: we have to believe that it’s at least 50% likely that we’re looking at two men who are romantically involved. There are few 50/50 images in our collection and none in our book. What determines whether or not we’ll acquire a photo can sometimes be an embrace that leaves no doubt that the relationship exceeds friendship or fondness. When possible, though, there is one sure way to determine if a photo is “loving.” We look into their eyes. There is an unmistakable look that two people have when they are in love. You can’t manufacture it. And if you’re experiencing it, you can’t hide it.”

Finding these photographs is a rescue mission for Nini and Treadwell, and they see themselves as stewards of the once lost images. They haven’t shared their collection with anyone until now, mostly because they didn’t think anyone would want to see it. To their surprise, the response has been overwhelmingly positive and often emotional.

The images have resonated with all ages, genders, and orientations, political or otherwise. Nini and Treadwell continue to collect images and hope to see their collection in a traveling exhibit or museum. They are considering a second volume that would include the hundreds of the military images they have acquired.

Reflecting on their collection in the book, Nini and Treadwell wrote, “Until this collection, we thought that the notion of us as a loving couple was ‘new.’ What we have learned from our collection is that we’re not new. We, and other couples like us, both male and female, are a continuation of a long line of loving couples who have probably existed since the beginning of time.”